Since it was founded in Antwerp, Belgium in 1962, the company has been at the forefront of innovation in ground segment technology, having been involved in numerous firsts in space activities.

It took its first steps in the space industry in the early sixties as a division of the Bell Telephone Manufacturing Company, later known as Alcatel Bell, an Antwerp based business that belonged to the American ITT Corporation.

Activities were just starting to be organised at a European level, with the European Space Research Organisation (ESRO) and The European Launcher Development Organisation (ELDO); Bell developed solar panel power conditioning equipment and a trailer based control and tracking station Down Range Guidance and Tracking Station (DRGS) for the Europa A launcher.

Between 1962 and 1966, scientists from Bell worked on one of the first ground stations to be developed in Europe.  State-of-the-art technology developed by the business was deployed in the ELDO Gove Down Range Guidance and Telemetry Station built at Gulkula on the Gove Peninsula in  Australia’s Northern Territory to track the downrange path of rockets launched from the RAAF Woomera Range Complex in South Australia.

With the creation of ESA in May 1975, Belgium was again a pioneering country with Belgian developed technology making a major contribution to the success of missions like Giotto, and the Ariane launcher. Bell took its business from subcontractor to prime contractor, supplying Electrical Ground Support Equipment (EGSE) for Spacelab; Tracking, Telemetry & Command (TTC) services for the CNES S-band ground stations network and flight equipment and payload EGSE for Olympus. The company earned a solid reputation amongst both institutional customers as well as in the commercial satellite communications market at large.

Fast forward to the new millennium, and space technology has reached operational maturity with space becoming something of a commodity, with satellite TV, weather forecasting, disaster management, navigation and much more.

The business has continued to grow and acquire know-how, joining the Alcatel Space group in 1998 and Alcatel Alenia Space in 2005.  In 2010, it became part of OHB AG, when it was known simply as Antwerp Space, before its ground segment satellite communications division was acquired by the pan-European Celestia Technologies Group in late 2019.

The business has been developing High Data Rate Receivers for over four decades now and its Omnisat modem for satellite payload data was ground-breaking when it was launched.  It remains a key part of today’s product portfolio.  Innovations also include its T&C modem IBB, which has evolved into a Virtual IBB with new features being added all the time. Celestia Antwerp has also launched a Sampler platform which meets current demands for virtual and cloud-based ground stations.

Other milestones have included successfully delivering the communication networks supporting the operation of the Galileo system; providing the ISS’ Columbus Lab EGSEs for European manned space flights; defining the EGSE for ESA’s Automated Transfer Vehicle as part of Europe’s support of the ISS as well as the MPCV EGSE for the Orion programme, and deploying a test system team to design, develop and manufacture the Payload Data and TTC Special Check-Out Equipment for Sitael for the new generation PLATiNO, all-electric multi-purpose small satellite platform.

“This year we are celebrating sixty years in space technology and a journey that has taken us from early pioneers to experts in ground segment satellite communications, with an unsurpassed reputation for technical excellence and innovation,” says Guy Van Dijck, Managing Director of Celestia Antwerp.

“The company cut its teeth on ground station projects in the early days when the technologies in use were very much in their infancy, and we have grown in both stature and expertise having amassed extensive knowledge and capability. We have collaborated on missions and projects with institutional and commercial partners across the world with a successful track record spanning six decades.

“Today, our business is one of the leading companies in Belgium working on some of the most prestigious, large-scale ground station integration projects in the industry.  With strong growth ambitions and a vision of continued success, we look forward to working with our customers, industrial partners and our talented team to make the next decade as big as the last six,” he adds.

More information about Celestia Antwerp is at https://www.celestia-antwerp.be 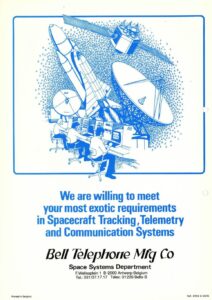 Your email is safe with us.

Reach out to us to publish here your recent news or press articles.